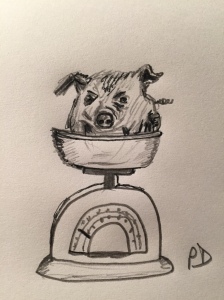 I was talking to my friend Tom today and he used this brilliant quote to talk about the constant testing that is used in education. The same as you don’t fatten a pig by weighing it, you don’t educate children by keep on testing them.

Education in the last 100 years or less has all been about the industrialised machine preparing inter-changeable cogs for their ‘machine’. The standardised test in the US invented for that very thing to bring everyone to a satisfactory average level of competency in certain repetitive tasks so that the machine could continue to efficiently function. Take a look at Seth Godin’s ‘what is school for?’. A question that rarely, if ever, gets asked about the purpose of education.

Education across the globe is systematically on auto-pilot, with little thought about the suitability or usefulness of education, preparing people for a world that doesn’t exist.

You don’t fatten a pig by keep weighing it and you do not ever make things better by doing the same things.

Curiousness got the human race to now, our compliance and standardised education will halt any further progress because there will be no more rebels, no more heretics, no more people causing a stir or challenging the status quo.

Just a lot of regularly weighed unintelligent and compliant ‘pigs’.

This site uses Akismet to reduce spam. Learn how your comment data is processed.